Jeffery Tucker reminded us of  the the final part of F.A. Hayek’s Nobel speech in 1974:

If man is not to do more harm than good in his efforts to improve the social order, he will have to learn that in this, as in all other fields where essential complexity of an organized kind prevails, he cannot acquire the full knowledge which would make mastery of the events possible.

He will therefore have to use what knowledge he can achieve, not to shape the results as the craftsman shapes his handiwork, but rather to cultivate a growth by providing the appropriate environment, in the manner in which the gardener does this for his plants.

There is danger in the exuberant feeling of ever growing power which the advance of the physical sciences has engendered and which tempts man to try, “dizzy with success”, to use a characteristic phrase of early communism, to subject not only our natural but also our human environment to the control of a human will.

The recognition of the insuperable limits to his knowledge ought indeed to teach the student of society a lesson of humility which should guard him against becoming an accomplice in men’s fatal striving to control society — a striving which makes him not only a tyrant over his fellows, but which may well make him the destroyer of a civilization which no brain has designed but which has grown from the free efforts of millions of individuals. 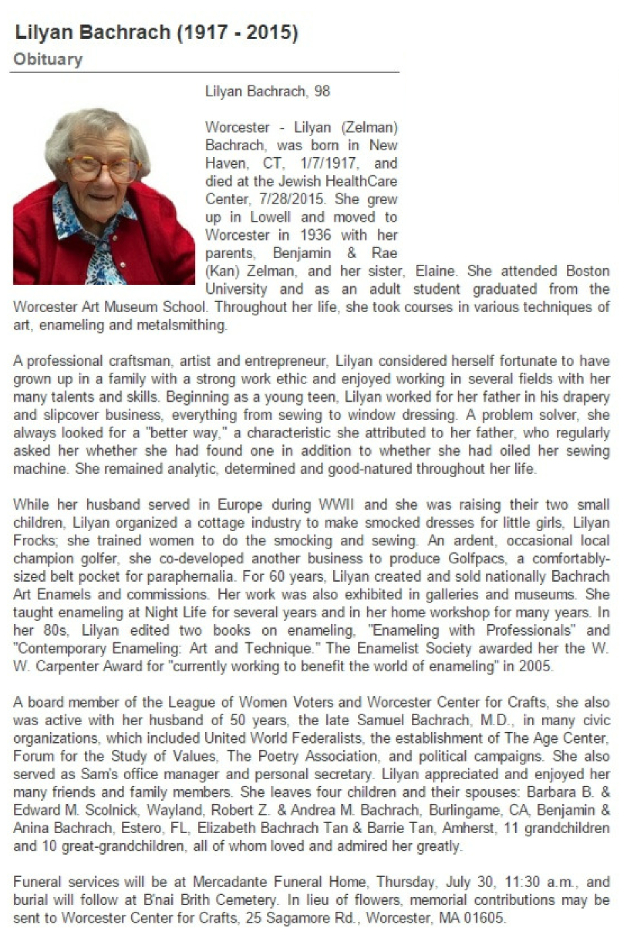 Worcester – Lilyan (Zelman) Bachrach, was born in New Haven, CT, 1/7/1917, and died at the Jewish HealthCare Center, 7/28/2015. She grew up in Lowell and moved to Worcester in 1936 with her parents, Benjamin & Rae (Kan) Zelman, and her sister, Elaine. She attended Boston University and as an adult student graduated from the Worcester Art Museum School. Throughout her life, she took courses in various techniques of art, enameling and metalsmithing.

A professional craftsman, artist and entrepreneur, Lilyan considered herself fortunate to have grown up in a family with a strong work ethic and enjoyed working in several fields with her many talents and skills. Beginning as a young teen, Lilyan worked for her father in his drapery and slipcover business, everything from sewing to window dressing. A problem solver, she always looked for a “better way,” a characteristic she attributed to her father, who regularly asked her whether she had found one in addition to whether she had oiled her sewing machine. She remained analytic, determined and good-natured throughout her life.

While her husband served in Europe during WWII and she was raising their two small children, Lilyan organized a cottage industry to make smocked dresses for little girls, Lilyan Frocks; she trained women to do the smocking and sewing. An ardent, occasional local champion golfer, she co-developed another business to produce Golfpacs, a comfortably-sized belt pocket for paraphernalia. For 60 years, Lilyan created and sold nationally Bachrach Art Enamels and commissions. Her work was also exhibited in galleries and museums. She taught enameling at Night Life for several years and in her home workshop for many years. In her 80s, Lilyan edited two books on enameling, “Enameling with Professionals” and “Contemporary Enameling: Art and Technique.” The Enamelist Society awarded her the W. W. Carpenter Award for “currently working to benefit the world of enameling” in 2005.

A board member of the League of Women Voters and Worcester Center for Crafts, she also was active with her husband of 50 years, the late Samuel Bachrach, M.D., in many civic organizations, which included United World Federalists, the establishment of The Age Center, Forum for the Study of Values, The Poetry Association, and political campaigns. She also served as Sam’s office manager and personal secretary. Lilyan appreciated and enjoyed her many friends and family members. She leaves four children and their spouses: Barbara B. & Edward M. Scolnick, Wayland, Robert Z. & Andrea M. Bachrach, Burlingame, CA, Benjamin & Anina Bachrach, Estero, FL, Elizabeth Bachrach Tan & Barrie Tan, Amherst, 11 grandchildren and 10 great-grandchildren, all of whom loved and admired her greatly.