Here is a link to some of Lilyan’s watercolor cards 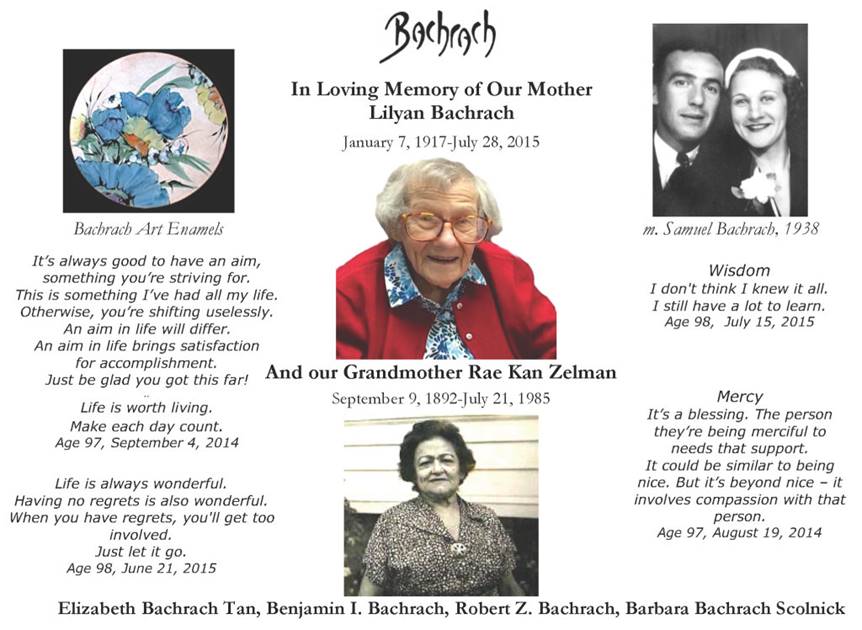 Joseph Trippetti was born in Philadelphia in 1923. While attending school at the University of California, Berkeley, he was drafted into the army, where he served from 1943 to 1945. Upon leaving the army he returned home and attended the Philadelphia Museum School of Art from 1946 to 1949. Although he studied painting and printmaking, he decided to specialize in silversmithing. During the same time he also apprenticed in the studio of the ceramist John Butler. He completed his course work in silversmithing at the Sheffield School of Arts and Crafts in England from 1950 to 1951. While in England, Trippetti developed his love for medieval imagery through the study of Renaissance tapestries. Upon his return to the United States in 1951, he moved to Ossipee, New Hampshire, to join Butler, who had opened a new pottery studio there. The following year, Trippetti opened his own studio focusing on the art of enameling, which combined his love of silversmithing and pottery. For inspiration he looked to medieval tapestries. The flattened and abstracted figures rendered in bold colors became recurring motifs in his work. After several years of experimenting with various techniques, he settled on cloisonné as his preferred medium. While this tedious and time-consuming method is usually associated with traditional imagery, he used his masterful talents to exploit the medium’s full expressive possibilities. It became a modern medium in his virtuosic hands. Although medieval-inspired imagery permeates his work, more contemporary themes and motifs are also explored, including abstract and nonobjective imagery. The surfaces of his plaques can be jewel-like, glistening, or matte depending on the desired effect. Trippetti’s enamels quickly won recognition. His work was accepted into numerous juried and invitational exhibitions. He was awarded prizes at prestigious exhibitions like the Wichita Decorative Arts and Ceramics Exhibition and the Miami National Ceramic Exhibition.

His work is part of the collections of the Wichita Center for the Arts and the Lowe Gallery, University of Miami, as well as those of the Currier Museum of Art, the New Hampshire Historical Society, and the Long Beach Museum of Art. He also created public commissions of sculpture in steel. His contribution to the field extended beyond art making. Trippetti held the position of supervisor of the Currier Gallery of Art in Manchester, New Hampshire, from 1955 to 1958, and two years later he became a full-time teacher at the Worcester Craft Center in Worcester, Massachusetts. In 1962 he returned to Manchester, where he accepted the position of executive director of the League of New Hampshire Craftsmen. He retired in 1969. In 1980, to honor his work and contribution to the cloisonné technique, an exhibition was organized by the Prestige Art Gallery in Peabody, Massachusetts, and a book, Joseph Trippetti and Cloisonné, was published. Trippetti now lives in Cincinnati, where he continues to produce fine enamels.

Joe Trippetti was Lilyan Bachrach’s  friend and teacher.  He contributed a chapter to Lilyan’s books

Enameling with professionals by Lilyan Bachrach (2002)