It’s freedom itself that people fear.

Once freedom goes away, it is difficult to imagine how things would work if it came back. The notion of freedom then scares people, and it becomes easy to think up a thousand different scenarios in which freedom can’t possibly work. 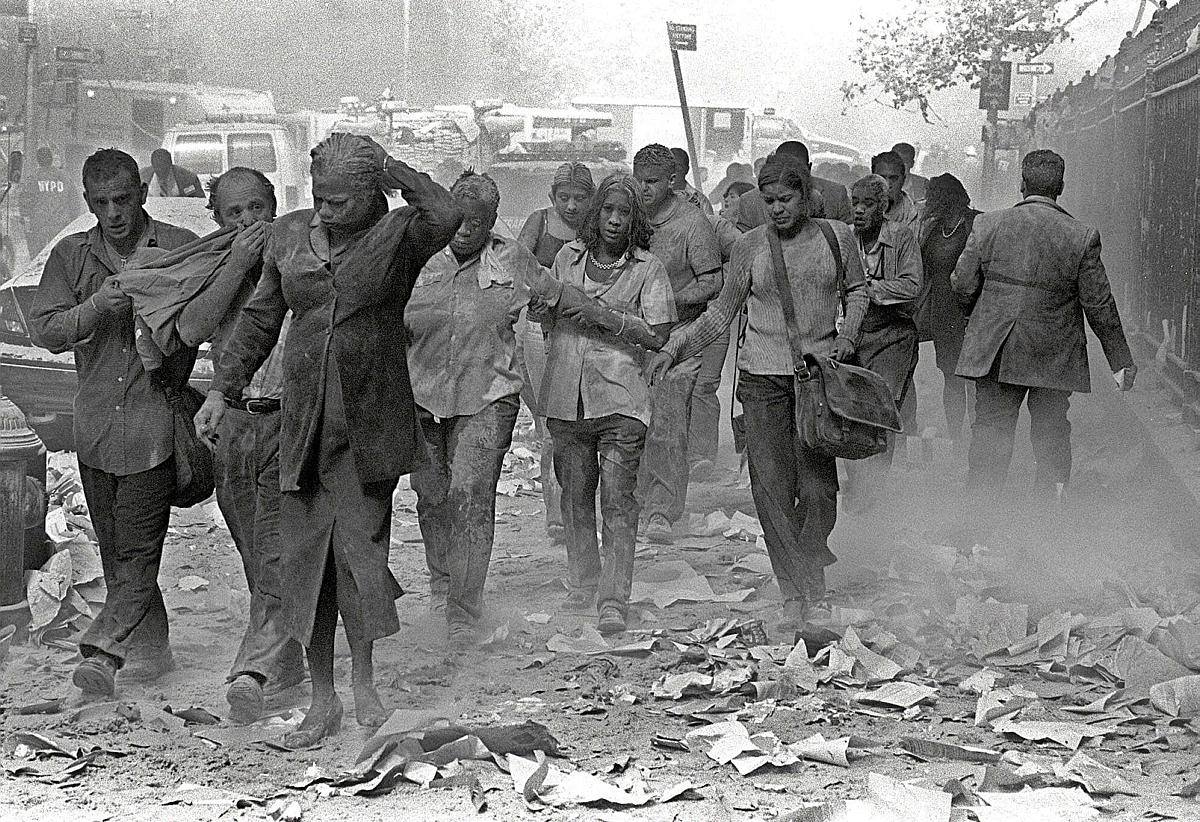 After the attacks of 9/11/01, Americans stood united with one another based on the principles contained within our Declaration of Independence and Constitution. The right to life, liberty, and the pursuit of happiness of our fellow Americans was of primary concern. When the towers collapsed, Americans were not thinking about the race, gender, sexual orientation, political party, or socio-economic status of those impacted by what we were witnessing. Seeing our fellow Americans race for their lives out of those towers, some completely covered in dust, helping or carrying the coworkers, friends, family, or strangers out of danger, it is difficult today to remember without feeling the same pain we all felt on that day, 14 years ago.

Dust, dirt, debris, and worse. That was the skin color of the people that heroes helped that day.

Finding a loved one. It didn’t matter the gender just that we all couldn’t even imagine how horrible the feeling would be to not be able to locate the person we loved that day. We wanted them all to find their way homes.

American. That was the only political party that mattered.

Values. Liberty was the way of life we wanted to protect.

Checking up on friends and neighbors, talking with strangers in our communities, taking care of those who needed help – in the aftermath of the attacks we were shown the bonds with our fellow man that has made our country great. A simple, yet genuine concern for each other with a “How are you doing?” shared between two strangers… sometimes a devastating tragedy can be the catalyst that shakes us awake to what really matters.

9/11/01 didn’t just bring together Americans who were horrified at the vicious, unconscionable murder of innocents that day. It brought sympathy, partnership, and friendship from many corners of the globe from our allies but it even thawed some old Cold War and Middle Eastern rivalries.

All of those things, maybe we didn’t realize it then but could it all be any more blatantly obvious now as we look back on that day?

9/11/01 brought us together, true, but in many ways as the days, months, and years passed it became a tragedy utilized to split some of us apart. I remember how over time my shock, sadness, and empathy slowly morphed into anger, fear, confusion, and retribution. Liberty turned into security. Our Bill of Rights went from being what elevated America above other nations in the world to what many of us perceived as a weakness that allowed the attacks to occur.

It took years for me to realize that what I loved about America and Americans on 9/11 was being sacrificed and lost to the policies, foreign and domestic, and the emotions, fear and security, which I believed were the only way in a post-9/11 world.

While we are lucky that our nation has not had to deal with another attack on our soil as devastating in scope as what happened that day, our nation has had to deal with the lasting impact of the debate over foreign entanglements, inalienable rights, the Fourth Amendment, indefinite detention, torture, the balance between liberty and security, and respect for our fellow man and the choices they make in their private lives.

Let us remember those who died on 9/11/01. Let us remember the goodness of our fellow Americans we experienced in the days after 9/11/01. Let us never forget: “We hold these truths to be self-evident, that all men are created equal, that they are endowed by their Creator with certain unalienable Rights, that among these are Life, Liberty and the pursuit of Happiness.”

“I’m the most militaristic person there is,” Donald Trump boldy bragged upon his return to Fox News Tuesday morning, after the clown-car wreck of last week’s Republican primary debate.

But “most militaristic?” Even for the Donald, this is a boast that goes a bit too far. In the 2016 election cycle, the “serious and responsible” candidates for the presidency are so bellicose they make Trump look Cindy Sheehan. He can’t even compete with the current Democratic president or the most likely Democratic nominee.