We didn’t intervene in Libya, setting the stage for the attack on the CIA post in Benghazi. We didn’t use a political double standard in ruling on tax-exemption requests from nonprofit organizations. We didn’t try to frighten government whistle-blowers by subpoenaing reporters’ phone records, reading their email, and even naming one journalist (Fox’s James Rosen) as a co-conspirator under the Espionage Act. We didn’t ask the NSA to gather data on us.

We did none these things. They did. Who are they? The wielders of power and the interests for whom they front.

…why should an island dispute between China and Japan be any business of the U.S. government? Would you be willing to give up your life to help Japan win its fight for those islands? Are you willing to sacrifice your spouse or your children for the sake of those islands?

Thanks to:
Galt’s Gulch for the tip.

Bob Bachrach posted some greeting cards painted by my mother 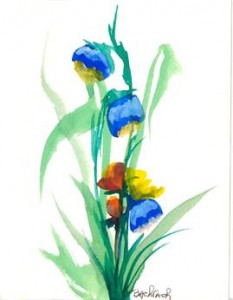 The best way to keep Iran from building a nuclear bomb is for the Obama administration and its nuclear client Israel to stop threatening the Islamic Republic.

On the other hand, North Korea has nuclear weapons, and Supreme Leader Kim Jong-un appears safe from any regime change sponsored by the U.S. government and NATO.

Lesson for foreign leaders who are in the doghouse with the U.S. government: Get a nuke.